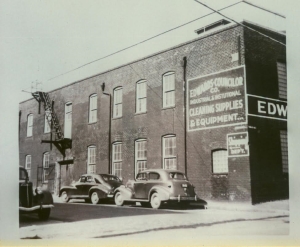 Edwards-Councilor Company was founded in Norfolk, Virginia in 1939 by William M. (Mort) Edwards and his wife Mary Edwards. It was the intension of Mr. Edwards to have his friend Harry Councilor join him as a partner in the business, however Mr. Councilor never did. As the business had already started as Edwards-Councilor Company, Mr. Edwards decided to keep the same company name which remains as it is today. The company began as a janitorial supply business. Shortly after World War II, Mr. Edwards purchased a warehouse and began manufacturing many of the janitorial chemicals the company was selling. One of the products he manufactured was a liquid quaternary sanitizing agent used to sanitize food contact surfaces (dishes, glasses, utensils, etc.) in the food service industry. Because of the difficulty users of liquid sanitizing products were having in accurately measuring in ounces and fractions of ounces, to accurately produce the correct concentration of the sanitizing solution required by Health Department Regulations, Mr. Edwards developed a quaternary sanitizer in premeasured tablet form, which eliminated the need to measure the liquid sanitizer chemical. By simply using one tablet per one gallon of water to accurately produce the correct sanitizing solution concentration, this new sanitizing tablet was quickly accepted by both the Health Departments and the food and beverage service industry.

Unfortunately Mr. Edwards died suddenly in 1949. His wife and partner, who already operated the administrative side of the business, managed to successfully continue its operation with the help of their key employees. The two Edwards sons, Bill and Tom had grown up helping in the business and following their graduation from college and their service in the military (Bill as a Coast Guard officer and Tom as a Naval Officer, carrier pilot), they joined the business full time, where both remain active today. A third generation, Charles Edwards, the current President of Edwards-Councilor Co. graduated from Fork Union Military Academy. Charles continued his education at Virginia Tech where he played on the football team.

The initial sanitizing tablet was registered with the U.S. Dept. of Agriculture, Pesticide Division, around 1947. This registration was transferred to the U.S. Environmental Protection Agency (EPA) in 1970 when this agency was created and became responsible for pesticide product registrations. In 1980 a tableting plant was built in Virginia Beach, Virginia where we continue to operate today. Our Sanitizing tablets are now registered and used in all 50 states.